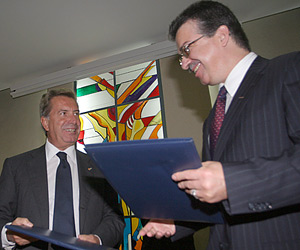 Bulgargaz Executive Director Lyubomir Denchev (R) has come under fire for refusing to disclose the money the state-owned company pays for its offices at a five-star hotel. File photo by Yuliana Nikolova (Sofia Photo Agency)
Bulgaria's state-owned gas company Bulgargaz, which is pressing for a 26% price hike on natural gas as of the beginning of next year, has been hit by revelations over its luxurious rented offices.

The company, which is in charge of import, supply, transmission, storage and transit of natural gas in Bulgaria, is accommodated at the five-star Anel hotel in the capital Sofia.

The scandal erupted after the Executive Director of the company Lyubomir Denchev refused to answer a reporter's question on the amount of the rent that the company pays monthly for the luxurious offices.

Denchev argued that the company was forced to move into the hotel because of a shortage of free rooms in its administrative building.

"I hope you don't expect me to talk about contracts here!," Denchev fumed at the press conference where the demand for the price hike was voiced for the first time.

"This is a new hotel and we signed a contract with the owners before its full completion. Now these expenses are being deducted from the rent," Denchev explained.

The Economy and Energy Ministry announced Wednesday it has launched a probe to find out the amount of the rent that Bulgargaz Holding pays.

"Bulgargaz Holding is in negotiations for the purchase of a new building to accommodate its offices," Bulgaria's economy and energy minister Petar Dimitrov told reporters before the meeting of the cabinet.

Reports say that the company has splurged a total of BGN 7 M on what has been described as "external services" for the first nine months of the year.