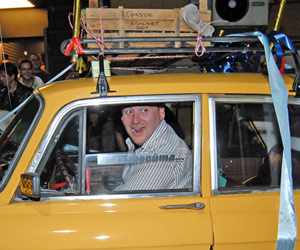 Mihail Kraus is pictured here at the party on the occasion of his 28th birthday two years ago, when he received as a present a Russian-made Moskvich. Photo by bulphoto
The son of Bulgaria's former transport minister has been abducted a month ago in a drama that ended with a EUR 300,000 ransom paid and a finger cut off, reports say.

The 30-year-old Mihail Kraus was abducted on October 22 by what are believed to be professional kidnappers, who demanded that a ransom of EUR 1,2 M be paid for his freedom.

The family refused to pay the huge ransom and shortly afterwards received the cut off finger of his son.

Mihail was set free on November 20 after a series of lengthy negotiations with the kidnappers. Finally his elder brother Anton was ordered to leave a bag full of EUR 300,000 in a garbage bin in downtown Sofia on November 19 and on the next day Mihail was abandoned in a suburb of the capital.

"These are all lies. Misho is safe and sound at home. I deny this information, this is crazy," Vilhelm Kraus, Transport Minister in the reformist rightist government of Ivan Kostov, told 24 Hours daily.

The reports, however, were confirmed by high-ranking officials from the Interior Ministry and people close to the family.

Over the last ten years kidnapping children of wealthy businessmen has become a highly profitable practice in Bulgaria, where groups can earn hundreds of thousands of levs in ransom.

None of the professional groups of kidnappers has been brought to court.
Crime » Be a reporter: Write and send your article
Advertisement
Advertisement
Expats.bg All Are Welcome! Join Now!
More from Crime