US President Bush Warns of "Difficult Compromises" at Mid-East Talks 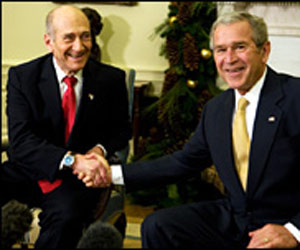 sraeli, Palestinian and the US leaders have voiced hope that the meeting could produce a starting point for serious peace negotiations. Photo by BBC
US President George Bush said "difficult compromises" lay ahead for both sides at the Middle East talks to be launched at a conference in Maryland on Tuesday.

Israeli, Palestinian and the US leaders have voiced hope that the meeting could produce a starting point for serious peace negotiations.

Speaking at a dinner for participants, US President George W Bush expressed his "personal commitment" towards resolving the conflict.

More than 40 organisations and countries, including Saudi Arabia and Syria, are attending the conference to be held at a US naval academy.

The US Secretary of State, Condoleezza Rice, has been meeting Israeli and Palestinian teams in an effort to clinch a joint statement that sets out an outline for how negotiations will proceed post-Annapolis.

Mr Olmert and Mr Abbas had separate meetings with President Bush in the White House on Monday.

Mr Olmert told reporters the "international support" provided by participants was a crucial factor in his optimism.

"This time it's different because we are going to have lots of participants in what I hope will launch a serious process of negotiations between us and the Palestinians," he added.

No peace deal could be agreed without the halting of rocket attacks into Israel from Gaza - controlled by the Islamist movement Hamas, Mr Olmert has also announced.

For his part, Mr Abbas praised the initiative but said talks would have to address the thorny obstacles to Palestinian statehood - the "permanent-status issues" - that have felled previous attempts at peace negotiations.

"We have a great deal of hope that this conference will produce expanded negotiations over all permanent-status issues that would lead to a peace agreement between Israel and the Palestinian people," he said after meeting Bush.

The US head of state also said earlier he was "optimistic" for the prospects for a serious dialogue.

High-level officials in Washington have, however, expressed scepticism about the talks.

In Jerusalem, at least 10,000 Israeli settlers protested against the conference, some bearing posters reading "Don't feed Israel to the sharks".

Movement Hamas, which controls the Gaza Strip, has repeated that any decision taken at Annapolis meeting would not be binding on the Palestinian people.

Hamas won a landslide victory in the January 2006 legislative election but is designated a terrorist organisation by the US, the EU and Israel.

The government has been subject to economic and diplomatic sanctions by Israel and its allies in the West.