At Least 33 Killed in Mine Blast in Ukraine 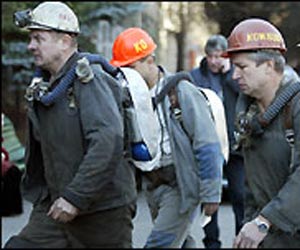 Ukraine's mines are among the most dangerous in the world. Photo by BBC
At least 33 workers have been killed after an explosion in a coal mine in Ukraine, BBC reported Sunday.

Rescue teams are putting all the efforts to find about 70 miners, who are still missing, officials said.

The blast, caused by a build-up of methane gas, occurred more than 1,000m below ground in the Zasyadko mine in the eastern Donetsk region, while more than 450 people were working there.

About 350 miners have been rescued, including 20 that have been taken to hospital.

A fire continues to burn down in the mine shafts.

Miners' family members have gathered at the site trying to find news of their men. Prime Minister Viktor Yanukovych is also heading to the scene of one of Ukraine's worst mining disasters in several years.

The country's coal mines are among the most dangerous in the world with a high number of fatalities from accidents.

One miner was killed on Saturday in a cave-in at the Lenin mine, also in the Donetsk region.

A gas leak at the Zasyadko coal mine, one of Ukraine's largest, killed 13 miners and injured dozens more in September 2006.

Another 80 people were killed in an explosion at the Barakova coal mine in Luhansk in 2000.