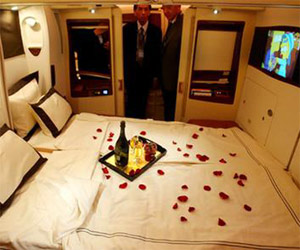 Alwaleed, who is the biggest individual investor in the world's largest bank, flew in from Saudi Arabia on his Boeing Co. 747.

Prince's aircraft will be delivered in 2010 and will be powered by Rolls-Royce Group Plc Trent 900 engines. While the superjumbo has a list price of $319 million, the actual amount he will pay was not disclosed.

The plane, which seats 525 people in a standard airline configuration, can house three bedrooms, private lounges, bathrooms, offices, a steam bath and exercise machines in a so-called VIP set-up.

Airbus, which is the world's biggest maker of commercial aircraft, expects to sell about 20 VIP versions of the A380.

Prince Alwaleed first invested in the world's largest bank Citigroup in 1991 and his Kingdom Holding Co. has a 4 percent stake worth at least USD 6.5 B, according to data compiled by Bloomberg. Like Berkshire Hathaway Inc. Chairman Warren Buffett, the Saudi prince built his USDS 25 B fortune by taking holdings in undervalued brand-name companies.

A nephew of Saudi King Abdullah, Alwaleed began investing after graduating from California's Menlo College in 1979. A year later, he received a USD 300,000 loan from Saudi American Bank, which was run by Citicorp, according to his authorized biography "Alwaleed: Businessman, Billionaire, Prince,'' written by Al-Jazeera International host Riz Khan.

In 1991, the prince invested USD 590 M in Citigroup predecessor Citicorp, which needed cash as it struggled with Latin American loan losses and a collapse in U.S. property.