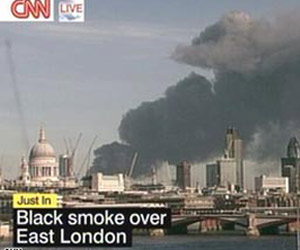 Fire crews were investigating the cause, but it was not thought to be terror-related.

The London Ambulance Service said there were not thought to be any casualties from the blaze in an industrial area of the city, close to the site of the 2012 Olympic Games.

Fire crews deployed to the scene, which is only a few miles from the Canary Wharf business district, a spokesman for the London fire brigade said.

At least 15 engines and 75 firefighters were at the scene tackling the blaze. A fire service spokesman said it was too early to say what has caused it.

The garage was on Waterden Road, which is just a third of a mile from the new Stratford International train station, the new London terminus for the Eurostar train. It is also close to the area of east London which is undergoing redevelopment for the 2012 Olympic Games and near the Canary Wharf business district.