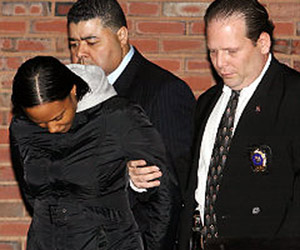 Natavia Lowery was arrested Friday for killing Linda Stein. Photo by Albans/News
In a stunning end to a sensational whodunit, Linda Stein's assistant confessed she bashed in the Realtor's head with a yoga stick after she blew pot smoke in her face and made a racial crack, the New York Daily News reported, citing the police.

Natavia Lowery calmly cleaned up the Fifth Ave. penthouse after killing the "Realtor to the Stars" in a rage - then filched the dead woman's cell phone and used her ATM card to steal $800, cops said.

Lowery, 26, was arrested Friday and charged with second-degree murder in the baffling Oct. 30 slaying of Stein, a punk-rock pioneer who became wealthy by selling Manhattan's best real estate to Madonna, Sting, Steven Spielberg and other celebs.

Hours earlier, with a videocamera rolling, Lowery confessed to cops, describing how her four months of employment as Stein's go-fer came to a bloody end.

She said on the morning of Oct. 30 she got into an argument with the brash Stein, who co-managed the Ramones before she began selling penthouses to the rich and famous.

Stein, 62, who was battling cancer, started blowing pot smoke in her face and berating her as she worked on the computer, Lowery told cops.

"Get the f---ing e-mails! How can you be so f---ing slow!" Stein supposedly bellowed, a police source said.

Stein, who had private yoga sessions in her $2.5 million pad, was waving a 4-pound strength-building yoga stick at Lowery as she yelled, the assistant told cops.

After Lowery retrieved the e-mails, Stein offered to buy her lunch as a peace offering.

"I've got my own money. I don't need you to buy me lunch," the assistant said indignantly.

"Black people don't have any money," Stein retorted, according to Lowery. "Save your money and I'll buy you lunch."

An enraged Lowery grabbed the yoga stick from Stein and hit her with it a half-dozen times until she was face-down in a pool of blood, police said.

During the interrogation, which began Thursday night and ended at 6 a.m. yesterday, Lowery presented herself as a victim who snapped under abuse.

Authorities said Lowery had the presence of mind to tidy up the apartment after the slaying and leave with the murder weapon, which is still missing.

She also took Stein's phone, and even answered it, telling a caller the broker was too busy to talk, police said. She later returned the phone to the apartment, a source said.

Her trips in and out were captured on surveillance tape, which showed her nonchalantly carrying out a bag, police said. She checked the bottom of her shoes once after leaving, possibly examining them for blood, sources said.