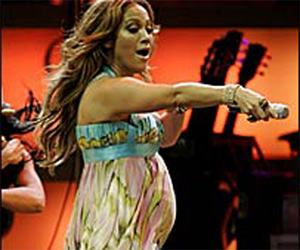 The 39-year-old singer made the announcement during a concert in Florida, which is part of her first joint tour with husband Anthony.

After her announcement Anthony kissed Lopez's stomach and said: "I didn't know she was going to talk."

J Lo, however, did not reveal when she is due to give birth.
According to reports in October the designer Roberto Cavalli had inadvertently confirmed the singer was expecting.

"Well Jennifer Lopez, at this moment, she requests something very special because she is waiting for the baby. It is so complicated because every week she is getting bigger," he said.

Lopez, who has been married three times and dated actor Ben Affleck and rapper P Diddy, said back in October she was experiencing a "healthy love" with Anthony.

The happy couple married in 2004. The baby will be the first Lopez's child, while her husband has already have three other children.