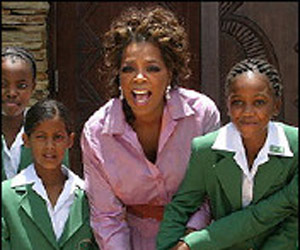 Oprah Winfrey has been left devastated by allegations students at her Leadership Academy for Girls in South Africa have been sexually and physically abused by staff. Photo by news.sawf.org
Oprah Winfrey said Monday she wept when she learned of allegations that a dormitory matron at her South African girls school had sexually abused students and she vowed that she would be "cleaning house" at the exclusive academy.

Tiny Virginia Makopo, 27, faces 13 charges of indecent assault, assault and criminal injury committed against at least six teenage students. Makopo, who says she is innocent, was released on bail after a court hearing in South Africa.

The Cape Argus, a South African newspaper, quoted several students at the school who alleged Makopo grabbed a girl by the throat and threw her against a wall.

Saying, "The buck always stops with me," Winfrey vowed to tighten the school's screening process for hiring faculty and staff. She said the head mistress's contract would not be renewed and certain other staffers would go.

"We are removing the dorm parents, and as I have said to the girls, [we are] cleaning house from top to bottom," the talk show queen said.

Winfrey said she had been initially told that a girl who accused the matron of abuse had left the school because the girl's mother wanted to spend more time with her. When she visited the school, Winfrey said, students were ordered "to put on happy faces" and not complain.

Winfrey, who has spoken openly at her own experiences of being sexually abused as a child, said she was devastated when the school's chief executive, John Samuel, told her in early October that a group of 15 girls had come forward with a list of complaints - including the alleged sexual assault of one of their classmates.

"When I first heard about it I spent about a half-hour going around my house crying," she said.

"It has shaken me to my core."

Opened Jan. 2 at a cost of $40 million, the Oprah Winfrey Leadership Academy for Girls was created to give 152 girls from poor backgrounds a good quality education.