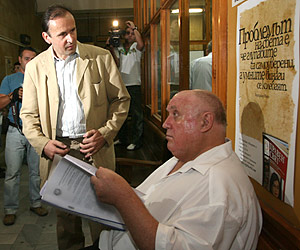 The step was taken after the court waived the document and transferred it back to the prosecutor's office, citing procedure breaches and errors.

Valentin Dimitrov faced court in the end of August at the first hearing in the lawsuit brought against him for currency frauds.

Dimitrov's defence challenged prosecutor on the case Bozhidar Dzhambazov, claiming the prosecutor has the motivation to lead the suit to a sentence for Dimitrov. The defence based their arguments on several interviews of Dzhambazov, in which he clearly says he wants to see Dimitrov sentenced.

The court however rejected the defence's demand for challenging the prosecutor, saying the interviews cannot be used as grounds for a challenge.

Still, the defence claimed the case should be sent back to the prosecutors' office, as there are many gaps and inconsistencies on the bill of indictment and it is not clear what exactly the charges against Valentin Dimitrov were.

Dimitrov is accused of failing to declare bank currency transfers to an Austrian bank between October 20, 1999 and July 25, 2003. He is also charged with violating the currency laws of Bulgaria for failing to declare before the National Bank a number of deals, amounting BGN 37 M.

The bank official, who processed Dimitrov's money at the Austrian bank has been summoned to testify, but did not show up in court during the previous hearing.

Valentin Dimitrov was released on BGN 20 000 bail on June 1 after spending one year behind bars on charges of mass money laundering and embezzlement.

He was arrested after the Toplofikatsiya heating utility that he headed was found in tatters and had to file for bankruptcy.