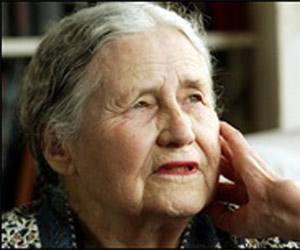 The 87-year-old author became the 11th woman to win the prize since it started in 1901.

"The Golden Notebook", "Memoirs of a Survivor" and "The Summer Before the Dark" are among Lessing's best-known works over her 57-year career.

The Swedish Academy, which awards the prize, described Lessing as "that epicist of the female experience, who with scepticism, fire and visionary power has subjected a divided civilisation to scrutiny".

Lessing was born in what is now Iran and moved to Rhodesia - now Zimbabwe - as a child before settling in England in 1949.

Her debut novel "The Grass is Singing" was published the following year and she made her breakthrough with "The Golden Notebook" in 1962.

The content of her other novels ranges from semi-autobiographical African experiences to social and political struggle, psychological thrillers and science fiction.