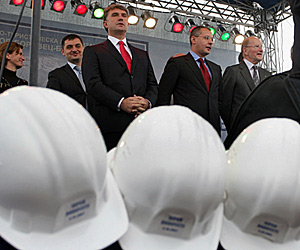 Super Borovets ground-breaking ceremony was attended by Prime minister Sergey Stanishev, his predecessor Simeon Saxe-Coburg, as well as Oman's Sultan and Prime Minister Qaboos bin Said al-Said. Photo by Nadya Kotseva (Sofia Photo Agency)
A mega-project, dubbed Super Borovets, in the Rila mountain, was given the final go-ahead with a ground-breaking ceremony on Monday after years of controversies and opposition from environmentalists.

The enormous complex will encompass the towns of Samokov and Beli Iskar and will expand one of Bulgaria's most popular skiing place Borovets resort.

The ground-breaking ceremony was attended by Prime Minister Sergey Stanishev, former king and former Prime Minister Simeon Saxe-Coburg, as well as Oman's Sultan and Prime Minister Qaboos bin Said al-Said, who is one of the main investors in the project.

Rila-Samokov 2004 AD, the company that will implement the project and owns 2 mln sq m of land in the Borovets mountain area, plans to invest EUR 500 M over the next few years.