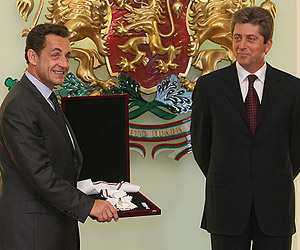 "It is magnificent!" said Sarkozy after receiving the order.

"I am honoured to award this medal to Mr. Sarkozy for his contribution to the development of the closer ties between our two countries," President Parvanov said.

He has also thanked Sarkozy and his wife for playing an important role in the final stage of the case of the Bulgarian medics, who were freed from imprisonment in Libya at the end of July.

"It was an act of great European solidarity," Parvanov commented.

"The five nurses and the doctor Ashraf are not only Bulgarians, they are European citizens as well. That made their tragedy a tragedy, which concerned the whole united Europe," said for his part France's head of state.

"France is a friend of yours," Sarkozy added.

He explained his wife, Cecilia, does not accompany him during his official visit to Bulgaria because she is very tired of the polemics over the figures that played the most important part in the medics' release.

"My wife prefers to remain in the shadow," Sarkozy said.

The visit of Nicolas Sarkozy is the first one a French President pays to Bulgaria since 1994.

Sarkozy's agenda in the Bulgarian capital included also meetings with Prime Minister Sergey Stanishev and the six medics, as well as a lecture at Sofia's Kliment Ohridski university rather than a visit to the parliament, with Sarkozy choosing to emulate Francois Mitterand's choice when he visited Bulgaria in 1989.

Sarkozy also made an important step towards securing a deal for four military corvettes for the Bulgarian navy.

"By the end of this year the two sides will consider a framework for an agreement on the procurement of four corvettes for the Bulgarian Navy," Sarkozy said after conferring with Bulgaria's Prime Minister Sergey Stanishev.

In his words an expert group will discuss the financial conditions and distribution of work between the Varna shipyard and France.

"We consider France to be our strategic partner and will be looking for working mechanisms of cooperation," Stanishev commented.

The prime minister underlined that a series of projects, including the procurement of new helicopters for the Bulgarian army in a EUR 360 M offset deal, is progressing according to plan.

Stanishev stressed that Bulgaria and France have common visions for the future of nuclear energy industry in the European Union and will step up their cooperation in this area.

In an advance interview granted to four Bulgarian newspapers, Sarkozy qualified Bulgaria as an "important partner" for France in the areas of common agricultural, defence and nuclear energy policies.

"I think we should step up cooperation in each of those areas, and I will propose both to President Parvanov and Prime Minister Stanishev that we do so," the French president was quoted as saying.

He declined to go into too much detail concerning the putative deal which could see France sell to Bulgaria four last-generation Gowind corvettes for a reported EUR 750 M, to be offset by heavy French investment in Bulgarian shipbuilding.

"I don't have a habit of interfering with ongoing trade negotiations. But anything that brings France and Bulgaria closer is a good thing, including in this case, because it is a choice that could bring a lot of positives to both countries," said Sarkozy.

Bulgaria has to modernise its armed forces in line with NATO standards, having joined the organisation in 2004, but so far has only bought one refurbished Belgian frigate ship.

It has been in talks to buy four Gowind corvettes, built by French company Armaris, a joint venture of shipbuilder DCN with electronics and defence firm Thales, for more than two years now.