Thousands of Miners Trapped in South Africa Gold Mine, Half Lifted to Surface 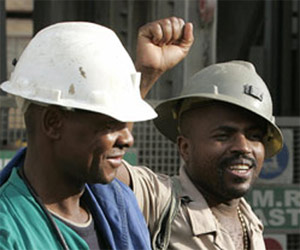 Miners are happy to see the daylight after they have been trapped for about 24 hours in a gold mine in South Africa. Photo by CNN
About 3,200 workers were trapped more than a mile underground in a gold mine near South Africa's Johannesburg after a falling pipe damaged the main shaft, Bloomberg reported.

Almost half of the miners have been lifted to the surface until Thursday morning as the rescue operation, organized by Harmony Gold Mining Co., Africa's third-largest gold producer, continues.

There are no casualties and paramedics have been sent down the mine to check on the trapped workers, who have water, Harmony spokeswoman said.

The mine, near Carletonville, about 50 miles southwest of Johannesburg, will stay shut after the rescue as an investigation takes place, she added.

The accident occurred after a pipe broke from a column near the surface of the mine on Wednesday "due to fatigue" and plunged down the 2,200-meter shaft.