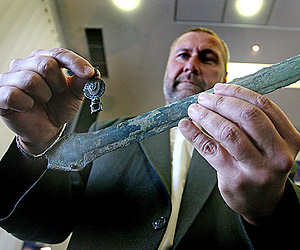 Professor Ovcharov shows two of the artifacts - a bronze sword and a silver distinction at a press conference. Photo by Yuliana Nikolova (Sofia Photo Agency)
The team of archaeologists of the famous Bulgarian Professor Nikolay Ovhcarov has unearthed three unique artefacts from the different epochs of the ancient city Perperikon.

The three artefacts were unearthed during the four-month excavations of the team, Professor Ovcharov himself announced at a Wednesday press conference.

The first artefact is a bronze sword dated back to the 13-12 century BC. Such swords were used in the Trojan War, the professor explained.

The second one is the clay idol of a man made some 6,000 years ago. The figurine had been used during magical rituals, when witch-doctors wanted to cure somebody from plague or measles.

The third artefact is a silver distinction from the 4-5th century AC, consisting of two parts, representing Jesus Christ. It probably belonged to a Byzantine noble.

The excavations at Perperikon and at the Temple of Orpheus near the village of Tatul finished just a couple of days ago, Professor Ovcharov said.

The findings have helped the archaeologists and historians to fill in some holes in the history.

The city of Perperikon has been inhabited since around 5000 BC, while a nearby shrine dedicated to Orpheus, near the village of Tatul, dates back to 6000 BC and is older than the Pyramids of Giza.

It has fallen into disuse after the Ottomans swept through the area in the 14th century.