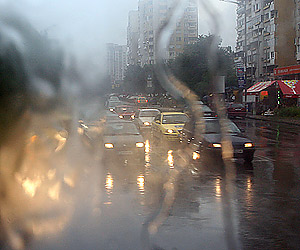 Capital Sofia was one of the areas least affected, with rain fall reaching no more than eight liters per square meter. Photo by Yuliana Nikolova (Sofia Photo Agency)
Bulgarian officials are yet to release an official estimate of the damages caused by torrential rains and hailstorms that hit the country on Saturday.

The worst damages have been reported in southern Bulgaria, where wind speed has reached in some areas 120 km/h, while the amount of rain that fell was around 70 litres per square meter.

Dozens of trees have been uprooted by the storm winds, which also damaged roofs in villages in towns throughout the southern regions of the country.

In the town of Dospat, 65 kilometres southwest of Plovdiv, a small tornado has damaged more than four in five houses.

In the same town, a 12-year-old girl was killed by lightning.