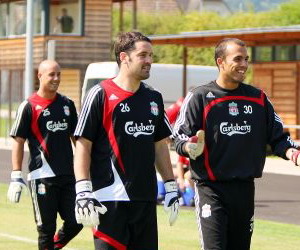 With Scott Carson (centre) out on loan at Aston Villa, Mihaylov (right) was expected to become Pepe Reina's (left) understudy for the season, before he was denied his work permit. Photo by liverpoolfc.tv
English Premier League club Liverpool have agreed to send Bulgarian goalkeeper Nikolay Mihaylov on loan to Eredivisie side Twente.

The Dutch club announced the season-long deal on its website.

Mihaylov joined the five-time European champions this summer, but was denied a British work permit, as he does not have enough games for the Bulgarian senior side.

Mihaylov made his debut for Liverpool in friendly game against French outfit Auxerre in July, which the English club won 2-0, before his application was rejected.

The goalkeeper, aged 19, started his career at Levski Sofia, for whom he played in 13 matches, with his debut coming when he was still a month short of his 17th birthday.

He was hailed early in his career as a dead cert future national team goalkeeper, where he would follow in the footsteps of his father Borislav, Bulgaria's most-capped player ever and the current chairman of the country's FA, and grandfather Bisser.