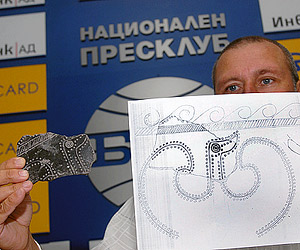 Top archaeologist Nikolay Ovcharov presented his latest finds from Perperikon sanctuary at a press conference in Sofia after lashing at the film that Discovery Channel is currently shooting in Bulgaria. Photo by Nadya Kotseva (Sofia Photo Agency)
A Bulgarian top archaeologist has reacted strongly to the concept a Discovery Channel team has picked for a film about the ancient Thracian culture.

Prof Nikolay Ovcharov claims the film, which Discovery Channel is now shooting in Bulgaria, concentrates exclusively and only on the Thracian gold treasures, which distorts the original idea of giving a full picture of the Thracian culture.

The change in the concept, Ovcharov says, came with the replacement of the British team with Americans.

"It is as if the Thracians were born to create their gold treasures and die. And then comes Georgi Kitov to discover them," Ovcharov, who is known for the excavation works at Perperikon sanctuary in Southern Bulgaria, told journalists, lashing at his fellow headline-grabbing colleague.

"We should not allow them to treat us like aborigines," he said in an emotional outburst, referring to the journalists from Discovery Channel.

According to Ovcharov the film breaches the rights of many archaeologists since what they discovered is being presented by somebody else.

Ovcharov's latest criticism at foreign journalists recall his remarks from November last year when he slammed an article on Thracian heritage in the National Geographic magazine, saying it aims to discredit the country and drive foreigners away.

Ovcharov said the article turns a blind eye to the significance and nature of the ancient Thracian culture and barely mentions the ancient sanctuary of Perperikon and the Valley of the Thracian Kings.