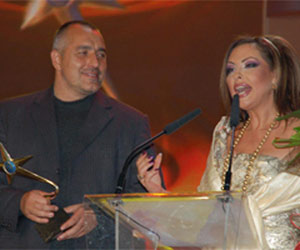 Just a day after announcing he will run for municipal councillor in the southern town of Dimitrovgrad on the ticket of the right-wing GERB party, Mitko Dimitrov, founder and CEO of Payner company, said he is withdrawing from the leading spot.

The U-turn came under the pressure of GERB party leader and Sofia mayor Boyko Borisov, who kindly said he did not want his name to be associated with pop folk music.

Provocative hip-shaking, lewd lyrics, dubious morality and origins paint the picture of today's chalga music, many of whose most popular faces owe their success to Mitko Dimitrov.

"I do not feel insulted and will continue to work for GERB," Dimitrov, who is among the founders of the party, said in a statement.

He declined to comment the reaction of his leader and laconically said he will withdraw if it is better for GERB.

Sofia mayor Borissov, who is known to be a pop folk music fan, applied the best of his diplomatic skills to make Dimitrov step back.

"Mitko Dimitrov has proven he can do business, and do it really well, but the halls get full of people who are interested in politics, so we do not need to lure them with lavish pop folk concerts," Mayor Borissov said.

Dimitrov, an engineer by education, founded Payner Company in 1990 and built glorious careers for a long list of pop folk singers. He also owns the satellite pop folk music channel Planeta, launched in 2002, and Planeta Folk TV channel, launched in March this year.

The company central office and production facilities are based in the town of Dimitrovgrad.

Polls suggest that GERB, a new right-wing party led by Boyko Borisov, the mayor of Sofia, may do very well in the upcoming local elections in October.