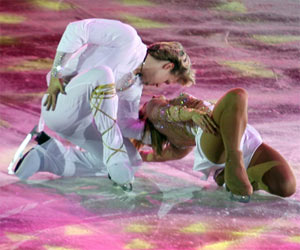 Photo by Yuliana Nikolova (Sofia Photo Agency)
Albena Denkova and Maxim Staviiski are Bulgaria's best dance couple who won their second world title at the figure ice-skating World Championship in Tokyo in March this year. When the two came back to Bulgaria, they were awarded by the President Georgi Parvanov the highest state order "Stara planina" - first degree.

In their ten-year joint career, Albena and Maxim have won two golden, three silver and two bronze medals at world and European championships, being the only couple that dared violate the hegemony of the great powers in this sport.

The first golden medal was won at the World Championship in Calgary last year, the silver - at the globe finals in Dortmund (2004) and the bronze one - in Washington in 2006.

"For me the second world title is much more valuable than the first one. The previous time when we reached the highest step of the winner's ladder, we did not fully realize what happened. A whole year after that we were thinking of what people expected of us at the next world championship. We worked very hard, led by the sincere wish to win the gold again," Albena confessed in an interview for Sofia News Agency a few months ago.

"I am more self-confident than Albena. I know we are the best! We have not even thought that it was possible to win the world title twice. We have always fought to take the lead at each and every stage of all competitions," Maxim commented back then.

The two coaches of the couple Natalia Linichuk and Gennadi Karponosov arrived to Bulgaria in April. Karponosov said Albena and Maxim should not give up before filling their medal collection with the Olympic gold.

Albena Denkova and Maxim Staviiski teamed up in 1996, when Albena's partner Hristo Nikolov retired. They are the first Bulgarian ice dancers to be placed in the top ten at Europeans.

Denkova was a gymnast before switching to skating. She has studied economics. Staviiski was born in Russia and has also skated in a Russian ice ballet. He was granted Bulgarian citizenship.

The duo presented at the end of April their biographical book "Love Is Alchemy of Success".
Views on BG » Be a reporter: Write and send your article
Advertisement
Advertisement
Expats.bg All Are Welcome! Join Now!
More from Views on BG