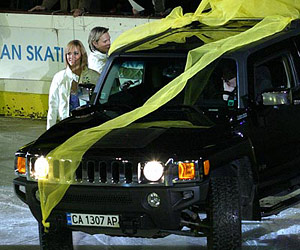 This is the Hummer in Which Staviiski was travelling, when he caused the crash. He got the car as a gift from Sofia Auto. File photo by Yuliana Nikolova (Sofia Photo Agency)
Bulgaria's world ice skating champion Maxim Staviiski, who survived a car crash on Sunday night, has actually caused it by drunk driving.

This resulted in the death of one man Petar Petrov, 24. Another young woman, who was travelling in the same car as Petrov, is in coma. Two other people, who were involved in the chain crash, were seriously injured.

Maxim, part of the ice duo Denkova-Staviiski, who defended their world title in Tokyo in March, tested positive for alcohol with 1.1 permilles in his blood.

The legal driving limit in Bulgaria is 0.5.

The car accident occurred on the road connecting the Black Sea towns of Sozopol and Tsarevo. Staviiski for some reason veered into the opposite lane with his Hummer and apparently lost control over the vehicle. This resulted in a crash with a Honda Civic with four people on board. One of them died later in the local hospital, a girl is in coma and the other two of them were wounded. The situation was aggravated by a consequent crash of an Audi that bumped into the back of the Honda.

Staviiski was travelling alone, without his partner in life and on ice Albena Denkova.Staviiski was probably getting back from the sea villa of Albena's parents in Tsarevo, where the two were named honorary citizens of the town.

Ironically, Maxim, together with Albena, is one of the faces of the campaign "If you're drunk - get off the car, I want to get there alive". Earlier in the year the star couple was awarded the highest state order "Stara Planina". The champions recently participated in an initiative of the Interior Ministry for raising funds for the children of policemen, who were killed while on duty.