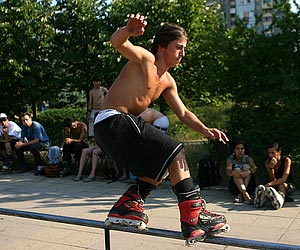 The tour started on July 21, when the skaters got on the busses and headed to the town of Dobrich to take part in a competition. The tour passed through Varna, Burgas, Stara Zagora and finished in Sofia. In the Mladost district the skaters made a small demonstration of their abilities at the grindboxes and the rails.

Initially the Sofia final had to take place at the most popular skating location in the city in front of the Russian Army monument, but the venue is currently inaccessible due to excavations for a station of the Sofia underground.

The tour was officially organized by Mirek Ragan the owner of Hedonskate in Poland. It was Mirek's idea to bring his best riders and also include some of the other USD PRO's in the event.
The tour is joined with a strong number of Riders from Macedonia, Romania, Greece and ofcourse Bulgaria joined the tour. In total the organizers had around 80 people in two buses travelling, skating and having fun.