Police Wraps up Probe into Swedish Tourist Death in Bulgaria 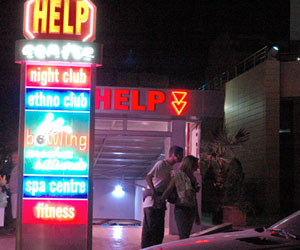 A Swede of Iraqi descent died on Monday after he was beaten up the previous night by bouncers at the "Help" nightclub in the southern Black Sea town of Nessebar. Photo by bulphoto.com
The policeman, who was shown to be standing idle as bouncers beat to death a Swedish tourist in the coastal town of Nessebar, may be temporarily dismissed, officials announced on Friday.

A disturbing footage, recorded by a witness at the scene, was aired earlier this week, showing senior commissioner Vassil Belchev watching passively as bouncer Yassen Minev is brutally stumping the helpless Barzan Arif, a Swede of Iraqi origin.

The tourist died in hospital on the next day, Monday, due to heavy bruising to his head and body.

Yassen Minev, the bouncer at Help disco club, was arrested on Thursday and charged with murder by negligence.

Minev and witnesses say that the tourist and a friend of his were drunk and acted aggressively when they entered the disco club. As bouncers tried to take them out of, the two young men threatened them with a knuckle-duster and a twenty-centimetre-long knife.