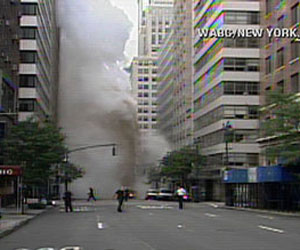 The blast left a crater in the middle of Lexington Avenue, sending clouds of steam, mud and rocks into the air and forcing the evacuation of nearby streets and Grand Central Station.

Hundreds of people fled as dozens of police, fire and utility workers arrived. Officials said the explosion was not related to terrorism.

Witnesses, however, said everybody was panicked as they were thinking of 9/11 and fearing a terror attack.

The New York Fire Department said three firefighters and one police officer were treated on scene for minor injuries. The other 22 injured were transported to various hospitals, a fire department spokesman said.

The New York Fire Department said it received a call reporting an explosion at 5:56 p.m. More than 170 firefighters were dispatched to the site at Lexington Avenue near 41st Street.