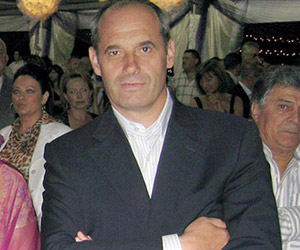 Manol Velev, husband of Bulgaria's youth and sports state agency chairwoman Vessela Lecheva and advisor to the president, was shot in the head on Wednesday outside his home in downtown Sofia. Photo by bulphoto
Sofia's chief prosecutor Nikolay Kokinov refused to shed any light on the investigation into the shooting of a prominent Bulgarian businessman earlier this week.

Manov Velev, 48, was shot on Wednesday outside his home and remains in coma after surgery.

Talking to the state radio BNR on Sunday, Kokinov said the prosecutors are exploring all possible avenues, including in the possibility the assassination attempt was related to his wife's job.

The businessman, who has invested in tourism, construction, transport and gambling, is married to Vessela Lecheva, the head of the state sports agency.

So far, there is nothing that would link Velev to organised crime circles, Kokinov said.

Media reports in Bulgaria have speculated that Velev has clashed more than once with powerful business interests, banking on the fact that his pull with the Socialist party will help him prevail.

The businessman was one of the biggest donors for Socialist electoral campaigns, as well as serving as an informal advisor on sports issues with Socialist president Georgi Parvanov.

When asked whether the prosecution has made any headway with its investigation into the murder of banker Emil Kyulev, another informal advisor to Parvanov with strong ties to the Socialist party, Kokinov said the perpetrator remains unknown despite the prosecution's best efforts to find him. Kyulev was shot while in his car at a stoplight in October 2005.