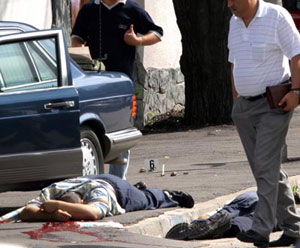 Milcho Bonev, one of the founders of Bulgaria's obsolete ex-grouping SIC, and his bodyguards were executed July 30, 2004 in broad daylight in Slavia restaurant-garden in Sofia district Ovcha Kupel. File photo by Yuliana Nikolova (Sofia Photo Agency)
Sofia City Court will convene yet again over the murder of alleged mobster Milcho Bonev, dubbed Baj Mile, who was killed in 2004.

The latest hearing of the case caused a furore after unprecedented security measures marked the appearance in court of Mladen Mihalev, aka Madzho, a prominent underworld figure. Mihalev was summoned on May 16 as a witness in the murder trial of Milcho Bonev, a close associate of his.

Bonev, one of the founders of Bulgaria's obsolete ex-grouping SIC, and his bodyguards were executed July 30, 2004 in broad daylight in Slavia restaurant-garden in Sofia's Ovcha Kupel district .

Tihomir Dochev, Stilian Georgiev, Georgi Stefanov, and Anatolii Munkov, aka the Rat were arrested on charges of involvement in the gang-style shooting of Bonev and five of his bodyguards.

Baj Mile was believed to be an important link in the drug trafficking and distributing network on the Balkans, investigated by Bulgarian and Serbian special services.