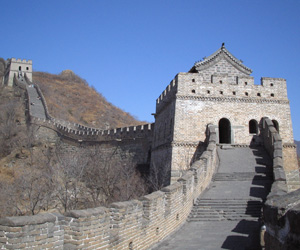 The Great Wall of China is the biggest man-made construction with its length of 6,400 kilometres and was long considered the unofficial "eighth wonder of the world". Photo by wikipedia.org
The Great Wall of China, long considered on par with the seven wonders of the ancient world, was officially recognised as such after a vote in which 100 million picked their favourites to replaced the monuments of antiquity, most of them long gone.

Peru's lost city of Machu Picchu, the Chichen Itza ruins of the Maya in Mexico, India's Taj Mahal, the Colosseum in Rome, the Jordanian city of Petra and the statue of Christ the Redeemer in Rio de Janeiro round up the list.

The campaign, started by Swiss Bernard Weber, polled close to 100 people over several years, and started with 200 man-made monumental structures.

The winners were announced late on Saturday in Lisbon, with England's Stonehenge and the Eiffel Tower in Paris failing to make the final cut.

Of the ancient seven wonders only the great Pyramid of Giza remains standing, which was not included in the voting, winning its position along the new wonders by default.

The new list replaces the hanging gardens of Babylon, the Colossus of Rhodes, the lighthouse of Alexandria, the mausoleum at Halicarnassus, the statue of Zeu at Olympia and the temple of Artemis in Ephesus - all long gone.

But the initiative failed to win the backing of Unesco, the UN organisation in charge of preserving cultural monuments, who branded the campaign "neither democratic nor scientific".