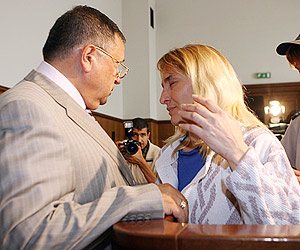 The judges decided the defendant is not likely to hide or impede the investigation process. Besides she was suffering from neurasthenia and had to look after her seriously ill mother.

The woman was charged with causing death after imprudence and faces up to ten years in prison.

Zhivka Ilieva caused the hellish accident after loosing control over her car, it flied over a metal fence on the road and fall on the top of another vehicle, which was moving in the other lane.

As a result of the clash three of the passengers in the pressed car - Alexandra Nenova, 19, Sofia Ruseva, 19 and Svetoslav Yonev, 23 - died on spot. The fourth person in the vehicle was injured but his life is not in danger.

The 16-year-old son of the drunk woman, who was travelling on the seat next to his mother, had his arm broken and slight injuries throughout his body.

After the police check there was found Ilieva had 2,88 promiles of blood alcohol at the time of the accident.
Crime » Be a reporter: Write and send your article
Advertisement
Advertisement
Expats.bg All Are Welcome! Join Now!
More from Crime