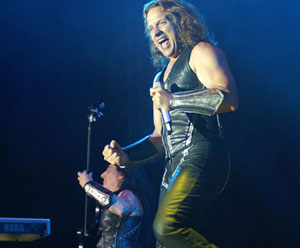 Legendary Manowar headlined the third and final day of the annual Kaliakra Rock Festival 2007 on June 30. Photo by bulphoto
Legendary Manowar lived up to their reputation of the most uncompromising and loudest heavy metal band after treating 20,000 exalted fans with a three-hour-gig in Kavarna.

The band headlined the third and final day of the annual Kaliakra Rock Festival 2007 on the Black Sea coast on June 30.

It was a dream come true for the Bulgarian fans, who were lucky enough to write history together with their favourite group - the concert entered the music annals as the longest show of a foreign metal band in Bulgaria. As a gesture of gratitude to their fans in Bulgaria the band played the country's anthem.

Manowar's new double live album, "Gods of War Live" will be released on July 6, 2007. This over-two-hour-long manifestation of pure power will feature the entire set list of the recently completed leg of the "Demons, Dragons and Warriors Tour 2007".