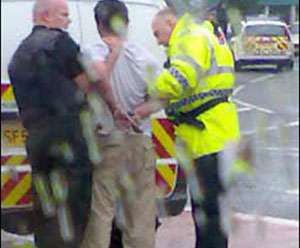 Michael McRanor sent this picture to BBC, saying this is one of the men being arrested at the scene. Photo by bbc.com
One of the men taken from the car that crashed into Glasgow airport had a suicide belt strapped around him, BBC reported.

Police are now holding four people following an attack on Glasgow Airport that is being linked to the discovery of two car bombs in London's West End.

Two men were arrested, one who is in hospital with severe burns, after Saturday's attack, and two arrests were made on the M6 in Cheshire overnight.