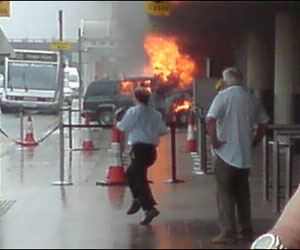 Eyewitnesses have described a Jeep Cherokee on fire being driven at speed towards the terminal's building.

They have also described seeing two Asian men, one of whom was on fire, who had been in the car.

Strathclyde Police said five people had been arrested and detained in connection with the incident.

The airport has been evacuated and all flights suspended following the incident at 1515 BST.

Late on Sunday, its work has been partially resumed as two planes landed at the international airport.

The incident comes a day after two cars were found containing explosives in central London.