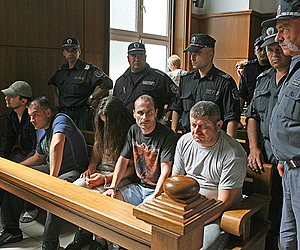 The five detainees faced court Tuesday after Prosecutor's Office demanded they stayed behind bars. File photo by Yuliana Nikolova (Sofia Photo Agency)
Bulgaria's Prosecutor Office has demanded that the five arrested individuals for the smuggling of Chinese goods to be left in custody, Darik News reported.

The prosecutors' demand will be considered by the Sofia City Court in the following weeks. The documents were marked as "secret" so the court sitting will be held behind closed doors.

The five arrestees, the notorious former customs officials Georgi Georgiev aka Purata (The Cigar) and his colleague Radoslav Zhivkov among them, were detained last week for participating in a smuggling channel.

The police also arrested Ivaylo Razlozhki - Tihia (The Quiet One) and two other individuals, who work for a shipping company.

Zhivkov and Georgiev were under investigation last year for their possession of slick cars. Georgiev, who worked in the Bulgarian Customs Agency's archives department on a salary of BGN 200 - BGN 300, is often seen driving cars worth over EUR 100,000 and claims he got the money from friends and mistresses abroad. At the time of the raid, the police, who investigated the channel for nine months, seized a big shipment of mobile phones, packed as mobile phones accessories. Packed this way, the cost of the shipment is 30 times lower than the price of cell phones, Chief Police Commissioner Valentin Petrov said.

According to preliminary calculations around 7,000 - 8,000 phones entered the country through the smuggling channel.

This is a typical customs fraud as the five arrested used well-known methods to the police - use of fake seals and forged paper work.