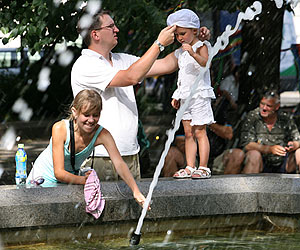 Fountains provide precious little relief from the heat, but they are far and few between. Photo by Yuliana Nikolova (Sofia Photo Agency)
Temperatures in Bulgaria are set to reach record highs on Tuesday, with meteorologists forecasting highs between 36 and 41 degrees Celsius.

The heat wave will be felt worst in the north of the country, in the Danube plain, where the temperatures could exceed the record highs for the time of the year, registered in the past century since scientists have started taking daily measurements.

In capital Sofia and Plovdiv, the country's second biggest city, the temperatures on Monday reached 35 degrees.

In Sofia alone, 16 people collapsed from the heat, and more than a hundred in the country as a whole. To prevent such occurrences, doctors recommend a high intake of liquids and avoiding going outside in the afternoon.