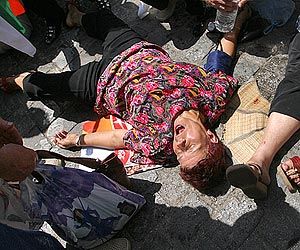 About a hundred elderly Bulgarians lay on the ground in front of Alexander Nevski Square as a sign of protest against their low pensions on Thursday. Photo by Nadya Kotseva (Sofia Photo Agency)
About a hundred elderly people staged Thursday yet another protest against their low pensions on Alexander Nevski Square in downtown Sofia.

The pensioners lay on the ground in front of Saint Alexander Nevski Cathedral. As a result of this action the traffic in the region has been temporarily stopped.

During the rally, an old woman lost consciousness because of the sweltering heat in the city.

The emergency team, which arrived on the spot ascertained there is no danger for the woman's life.

The protest was staged despite the fact that the Parliament decided pensions to rise by 10 % instead of 8.5% as of July.