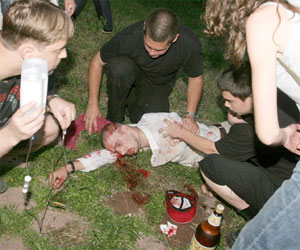 At least 60 people were engaged in the fight that broke out after a group of skins attacked a pack of punks and it is well known that supporters of the two trends see one another as eternal enemies.

According to witnesses it was indeed the skins that started the fight, throwing empty beer bottles and punching in the face every punk they got hold of.

The police quickly put the situation under control, as there is a police department just a few meters away from the concert hall.

Four of the injured were transported to the Pirogov Emergency Institute with severe injuries on the heads and bodies, one was taken to the ISUL hospital and the other three were taken to Okrazhna hospital.

The large amount of alcohol and drugs had caused the incident, the police believe.

The gathering of the two enemy camps happened because both had come to see the UK punk legend Exploited, who were the special guests at the 5-hour concert.

The peace between the Sofia punks and skins started somewhere in the mid 90s, when, after a football game rivalling gangs engaged in a fierce fight. Then, a skin was severely cut with a knife by a punk, who later turned out to have Jewish origin, and skins are know for their hatred for this particular nationality.