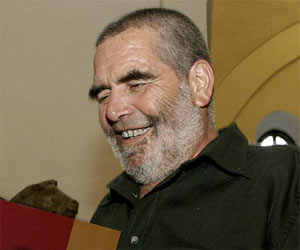 Bulgaria's Indiana Jones, Georgi Kitov and his team have found medieval gold Thracian jewellery near Bulgaria's town of Sliven. Photo by Yuliana Nikolova (Sofia Photo Agency)
A total of eleven gold rings, three bracelets and a pair of ear-rings have been found in a Thracian mound between Bulgaria's villages of Topolchane and Kaloyanovo.

The artifacts were discovered in the tombs of three women by one of Bulgaria's best-known archaeologists, Professor Georgi Kitov.

"In 13th-14th century BC there was a medieval settlement near the mound," professor Kitov explained.

The finds will be preserved in the museum of history in the nearby town of Sliven.

After the unearthing of the first layer in the place, the excavation works will continue. There are to be performed such in a total of 12 Thracian mounds in the region during this summer.