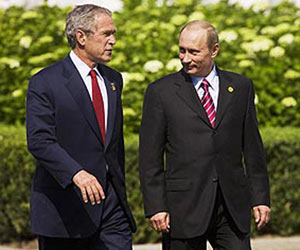 Speaking after discussions on the sidelines of the Group of Eight summit in Heiligendamm, Germany, Bush said he looks forward to continued dialogue with the Russian leader next month in Kennebunkport, in the northeastern US state of Maine.

Putin said Azerbaijani President Ilham Aliyev had agreed on the use of a Soviet-built radar in Azerbaijan as an element of the US missile defense system.

The two sides agreed to set up a working group to consider steps for keeping the United States, Russia and Europe free from the threat of missile attacks from rogue states.

Meanwhile, German Chancellor Angela Merkel says the G-8 leaders have agreed to set a goal of pursuing substantial cuts in greenhouse gas emissions blamed for climate change. She says they approved the accord involving a clear commitment to continue the United Nations climate process after the Kyoto Protocol expires in 2012.