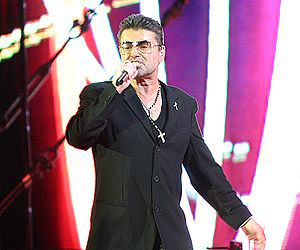 George Michael's show in Sofia unfolded at Lokomotiv stadium on a giant eighty-ton stage, fixed with equipment that was transported to the Bulgarian capital with a fleet of 36 TIR vehicles. Photo by Kameliya Atanasova (Sofia Photo Agency)
A mature and politically engaged George Michael took the stage in Sofia Monday evening in support of the plight of the five Bulgarian nurses jailed in Libya.

Widely described as the most impatiently awaited gig of the year in Bulgaria, the concert was part of George Michael's "25 Live" concert tour, his first in over fifteen years.

The British pop star cancelled a concert in Germany to come to Bulgaria and embrace the campaign "You are not alone", which aims to raise the international profile of the nurses, sentenced to death in Libya on bogus charges of intentionally infecting 426 children with AIDS.

"The very special reason for being here tonight is to support the "You are not alone" campaign and free the five nurses and a Palestinian doctor jailed in Libya! And do it now!," George Michael told an exalted audience of fifteen thousand fans packed at Lokomotiv stadium.

To prove his allegiance to the cause, George Michael wore a red, white and green ribbon - the country's national colours, a symbol of the initiative, taken up by Darik Radio, the private national channel bTV and Standard newspaper that have united thousands of Bulgarians in support of the nurses.

With no new album to promote, the concert offered the audience favorites like "Faith," "Father Figure" and "Too Funky," while also including newer hits.

But the pop star couldn't resist making a controversial dig at US President George Bush with his 2002 song "Shoot the Dog." During the number, an enormous balloon depicting a cartoon-ish George Bush rose out of centre stage. George then unzipped the balloon's pants and out came a bulldog with a British flag on it.