Bulgaria's Energy Minister Gets Thumbs Down from Fellow Socialists 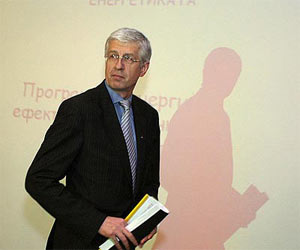 Minister Rumen Ovcharov was suspended over a large-scale corruption investigation at the beginning of the month. Photo by Kameliya Atanasova (Sofia Photo Agency)
The hard-core leftists in the Bulgarian Socialist Party called for the resignation of Energy and Economy Minister Rumen Ovcharov for the damage done to its reputation.

Minister Rumen Ovcharov was suspended over a large-scale corruption investigation at the beginning of the month. Two weeks later the Socialist Party did not live up to expectations in their showing in the country's first European vote after losing, albeit by a small margin, to the centrist GERB party.

Yanaki Stoilov, MP and informal leader of the hard-core group, claims that Ovcharov was willing to exit and handed in his resignation at a meeting with Prime Minister Sergey Stanishev at the beginning of the month.

It was right after that meeting that the energy minister was forced to take a leave and is expected to be back after the prosecutors' investigation ends.

Ovcharov faced wide-spread calls to resign over the allegations of siphoning off massive amounts of state funds. He has been accused of meddling in official investigations of high-level corruption involving the Sofia city heating company and tobacco monopoly Bulgatabac.

The minister, however, has appeared adamant that he will not resign over what has been described as a mega-scandal.
Politics » Be a reporter: Write and send your article
Advertisement
Advertisement
Expats.bg All Are Welcome! Join Now!
More from Politics