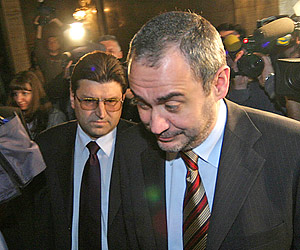 Velchev's words came after a hearing with the Parliament's committee charged with combating organised crime.

The committee decided not to set up an ad hoc parliamentary committee to spearhead the investigation, Velchev added.

The scandal erupted at the end of last month, when Kornelia Ninova, deputy to Economy Minister Rumen Ovcharov, accused the head of the investigative service, Angel Alexandrov, of extortion.

Ninova, a former investigator herself, said Alexandrov demanded repeatedly that she siphoned off funds from tobacco monopoly Bulgartabac, whose supervisory board she chaired as deputy economy minister, for the use of the investigative service.

She has since resigned as deputy minister and was heard by prosecutors on Monday, ostensibly to back up her claims.

The scandal is an extension of the scandal around Sofia heating utility firm Toplofikatsiya, whose former chief executive, Valentin Dimitrov, was charged with money laundering and embezzlement.

Tanya Sharlandzhieva, one of the investigators on that case, was accused by Alexandrov of leaking information about the probe.

Ninova and Sharlandzhieva are now facing official charges of leaking information about the probe for the benefit of one key witness, businessman Krassimir Georgiev. Ninova is charged with instigating the leak, with Sharlandzhieva carrying out the orders of her former colleague.

Sharlandzhieva denied any charges of leaking information, and has earlier accused Alexandrov of trying to tamper with the investigation.

Alexandrov, who has since gone on unpaid leave, claims that the attacks against him come from the Economy Minister Rumen Ovcharov, who used Ninova to pressure him to stop poking around certain cases that may lead to the minister.

Ovcharov has faced wide-spread calls to resign over the allegations of siphoning off massive amounts of state funds, will take a leave when he returns from his official visit to Moscow.