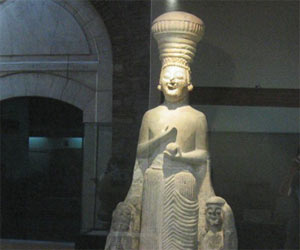 The rare find was unearthed during excavation works, done because of the construction of a new private hotel.

"The statue has no head and part of the goddess' palm is also missing," the curator of the local museum Radostina Encheva said.

It emerged that a column with a Latin inscription and an architectural element with bulls' heads were discovered on the same spot on Monday.

The construction works have been left. The police will keep the site until a team of archaeologists makes excavations.