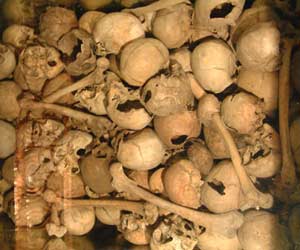 Many of the sculls that are still kept in the Batak church and museum clearly show that people had been killed by blows to the head. Photo by pravoslavieto.com
German scientists from the Eastern Europe Institute with the University of Berlin have sparked a wide controversy in Bulgaria, claiming that the five-century long Ottoman reign over the country was a sham.

Martina Baleva and Ulf Brunnbauer say that one of the most horrendous acts in Bulgaria's history - the slaughter of thousands in Batak, has been a myth and the number of victims overrated.

The two are planning a science conference on May 18 to announce their theory while the citizens of Batak are ready to stop them at any cost.

Nearly the 5,000 people of the town of Batak including women and children were slaughtered, beheaded or burned alive by Ottoman irregulars who left piles of dead bodies around the town square and church in 1876, giving start of the April Uprising. American journalist Januarius McGahan, who first described the Turkish atrocities in Bulgaria had exaggerated in his reports, the two Germans claimed.

Batak's Mayor Petar Paunov is outraged at the new allegations and say that they are a sacrilege and an insult to the memory of the people from the town.

The truth of the 5,000 victims that our town gave during the April Uprising is known worldwide and has been passed on from generation to generation, he said. The authors of the idea may jeopardize the ethnic peace in the region where Muslims and Christians now live together in peace, Paunov fears.

The mayor said that Baleva only visited the town twice for half an hour each. She sent them a proposition for a new conceptual model of the Batak museum that was waived off by the locals. "I would like to invite her and her German colleagues into the church where the thousands of sculls of the people killed in the slaughter are kept," Paunov said.

He has already contacted the country's Vice President, who is native of Batak, to ask for his assistance in resolving the matter.