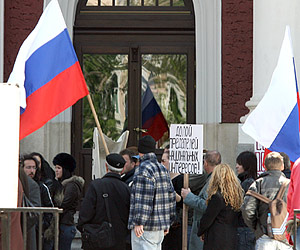 A Russian rally in front of the National Theatre "Ivan Vazov" flabbergasted Sofia citizens before finding out it was a scene from the film adaptation of the Hitman series. Photo by Yuliana Nikolova (Sofia Photo Agency)
Sofia citizens enjoyed a peculiar sight when dozens of protestors carrying Russia's national colours appeared on the verge of storming the National Theatre.

The Sunday rally in front of Ivan Vazov theatre was actually a scene from the film adaptation of the Hitman series, whose shooting began on March 27 in the Bulgarian capital.

Legendary Luc Besson is producer of the movie, which features Timothy Olyphant as the world's deadliest assassin, while Dougray Scott portrays the antagonist. Olga Kurylenk, Robert Knepper, Ulrich Thomsen and Michael Offei also have joined the cast of the videogame adaptation.

The game's story centres around an international assassin known only as Agent 47 (Olyphant) who works for a mysterious organization dubbed the Agency.