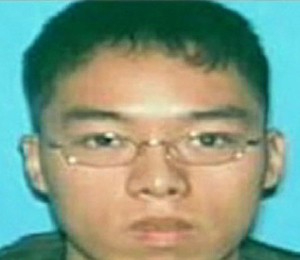 The gunman in Monday's Virginia Tech campus shootings has been identified as Cho Seung-Hui, 23, a student and native of South Korea. Photo by CNN
Renowned forensic psychiatrist Michael Welner believes evidence strongly supports that the Virginia shooter Cho had paranoid schizophrenia. He made the statement in an interview for ABC News on Wednesday.

The main evidence are a note, Cho Seunghui, 23, a South Korean student, left in his dorm room before the massacre and his writings that sometimes shocked professors and students in his creatinv writing classes.

The lone gunman behind the worst mass shooting in American history harboured a deadly grudge against his university and was obsessed with a female student, police disclosed yesterday.

In the note discovered by the FBI in his room, Cho railed against "rich kids," "debauchery," and "deceitful charlatans" at Virginia Tech, where he shot dead 32 people before turning his gun on himself. All of the victims were shot three times.

The note, which ran to several pages, also stated, "You caused me to do this," which was thought to have been a reference to 18-year-old Emily Hilscher, his first victim.
She was killed in her room at the West Ambler Johnston Hall accommodation block along with a dormitory warden, Ryan Clark, 22.

One of his disturbing writings, a play he wrote last year as part of a writing class gave some clue to his thinking. Entitled "Richard McBeef," it featured a 13-year-old boy who accuses his stepfather of paedophilia and murdering his father. The teenager talks of killing the older man, and, at one point, the child's mother brandishes a chainsaw at the stepfather. The play ends with the man striking the child "a deadly blow."