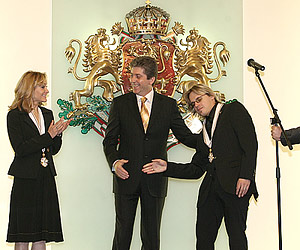 The awarding came at the initiative of Prime Minister Sergey Stanishev, who wished to give the two-time world champions due recognition for their contribution to Bulgarian sports.

Bulgaria's dance couple Albena Denkova and Maxim Staviski won on March 23 the gold medals at the figure ice-skating World Championship in Tokyo. The duo defended their title for the second time, representing the seven deadly sins in a dance to remember in the third stage of the competition.