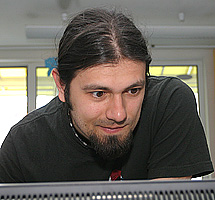 Photo by Yuliana Nikolova (Sofia Photo Agency)
We're in the last week of lent, the week when Christians commemorate the passions of Christ, his crucifixion and resurrection.

It's one of those times when religion, usually relegated to a secondary and tertiary role in the hectic lives we lead nowadays, steps back to the front.

Even people who are by no means religious for the rest of the year often use this week to "get in touch with the divine."

Fine, Bulgaria is a free country and its constitution grants the right to freely exercise one's religious beliefs.

But the proposal to introduce a class about religion, even as an optional one, which enjoys serious support according to one poll, is a step in a dangerous direction.

The separation of the church and state is a cornerstone of the modern society. вЂ?Modern" not necessarily as "contemporary," more like secular, which keeps religion out of politics and education, which is aware of diverse and competing points of view.

Now that very cornerstone is being taken out. Give in a little and next you know, you'll hear demands for creationism to be taught on equal terms, or instead even, of the evolutionary theory.

Furthermore, it is doubtful anyone can draw a syllabus of teaching about religions that would satisfy all the representatives of said religions. All in all, a can of worms better left unopened.

Finally, what bothers me personally is the reason why the respondents of the survey support the idea.

"Such a class could help check juvenile delinquency, aggression and drugs use."

Isn't that part of raising your kid, the job description of a parent? It's a pretty sad state the society finds itself in, if Bulgarians would pass their parental responsibilities on to the state, rather than do it themselves.