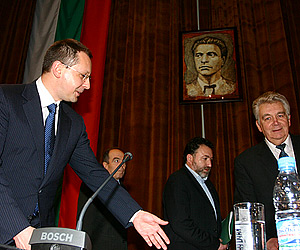 PM Sergey Stanishev said the country will spend BGN 255000 for the celebrations of Apostle of Freedom's 170th anniversary. Photo by Kameliya Atanasova (Sofia Photo Agency)
Bulgaria will mark the 170th anniversary of the birth of the Apostle of Freedom Vassil Levski with a number of events throughout the country, PM Sergey Stanishev announced on Thursday.

Stanishev took part in the meeting of the National Committee, where representatives of the Committee and the mayor of Karlovo, Levski's hometown, discussed how to mark Apostle's anniversary.

The culmination of the celebrations will be on July 18 in Karlovo. The anniversary will also be marked in several other cities outside Bulgaria. A monument of Vassil Levski will be erected in Skopje, A scientific forum will take place in Greece and there will be different events in Moldova, Ukraine, France and the US.

The Council of Ministers has already allocated BGN 255 000 for the celebrations, Stanishev said but added the money is not enough and the business must also participate with some funding.

Bulgaria's National Library will throw a special exhibition where Levski's secret notepad, some of his belongings and a lock of his hair will be shown.

In 2007 Bulgaria marks 170 years of Levski's anniversary and 130 years from country's liberation from Ottoman yoke.

Vassil Levski was born on July 18, 1837 with the name Vassil Ivanov Kunchev in the Balkan town of Karlovo. He was a Bulgarian revolutionary, ideologist, strategist and theoretician of the Bulgarian national revolution and leader of the struggle for liberation from Ottoman yoke.

Due to his major significance for the liberation of Bulgaria, Levski is hailed as a national hero and referred to as "The Apostle of Freedom".