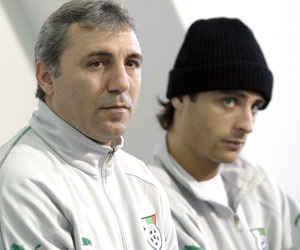 The striker is to take the responsible position despite the surprising return of previous captain Stilian Petrov to the squad.

Stoitchkov said also that all the conflicts between him and Aston Villa's midfielder Petrov are completely forgotten.

"Aston Villa is not good enough team for Stilian. He had great expectations but was disappointed," the coach commented.

Later in the day Stoitchkov will give a press conference, in which he will say more about how fit the Bulgarian players are before the next European championship qualification.

The team is to play against Albania on March 28.