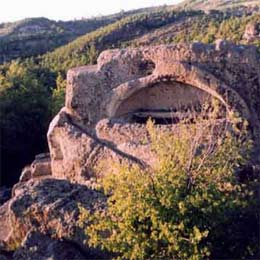 The famous sanctuary dedicated to Dionysus of the Bessi in the sacred Thracian city Perperikon. Photo by selo.bg
Bulgarian archaeologists uncovered another of the mysteries in the Perperikon area, an ancient living region of Thracians.

The have found a bronze spear from the time of the Trojan War. The finding shows Thracians' sacred city has been a metallurgical centre before more than 3000 years ago. Perperikon was the place where armoury was produced for the belligerent Thracian tribes.

The finding was made accidentally on Sunday in the foothills of Perperikon. The bronze peak, which was some 30 centuries ago was part of Thracians's weapons, of the ancient spire was found intact.

Homer in his Iliad wrote that every warrior had two pikes, nearly two metres long each. According to Professor Nikolay Ovcharov, it is highly probable that the discovered bronze pike peak belonged to a Perperikon warrior, who had participated in the 12-year-long battle for conquering Troy.

On February 23, archaeologists announced they have made an incredible discovery in the Perperikon area. They said last summer they discovered the missing link in Thracian's history. They have found evidence for the transition from the late Bronze epoch to the early Iron epoch.

The living area of Perperikon has been around 12 square kilometres, which is much more than the one of Troy for example.

The earliest traces of human civilisation discovered so far at Perperikon were dated to the late Neolithic Period, 6th-5th millennium BC.

The ancient Thracian city of Perperikon is located in the Eastern Rhodopes, 15 km northeast of the present-day town of Kardzhali, on a 470 m high rocky hill. The city is called "The Sacred" because of the famous sanctuary and oracular shrine dedicated to Dionysus of the Bessi was situated there.

A legend tells that Alexander the Great himself had sacrificed upon the altar of Dionysus.