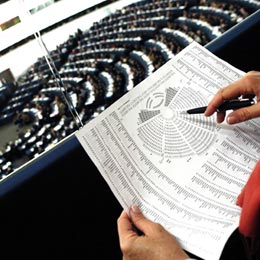 The nationally representative survey was conducted by the National Center for Public Opinion Research from February 23 to March 1 and included 1000 respondents from 86 towns and villages.

Asked how they will vote on May 20, 8% of the respondents picked the nationalist party and just as many - the ethnic Turkish Movement for Rights and Freedoms.

The ruling Socialist Party retains its lead from the general elections and is expected to garner 22% of votes. It is closely followed by the new right-wing formation GERB party (16%), whose founder, informal leader and most popular face is Sofia mayor Boyko Borisov.

The voters' sentiments for the centrist Simeon II National Movement mark a fall and it grinds at 2.5 %. No more than 1,6% of the respondents said they would back the candidates of the right-wing hardliners from Democrats for Strong Bulgaria.

In an election, which is hardly expected to quicken the pulse of the voters, 31% of the respondents said they would not bother to go to the ballot boxes.

Lack of experience in MEPs vote and lack of information about the MEPs rights and obligations, as well as the impact they will have on Bulgaria were singled out as the reasons for the voters' weak interest.

Currently Bulgaria has 18 and Romania 35 MEPs at the European Parliament. They enjoy full-fledged rights, but are delegated by their parliamentary represented parties instead of elected by general suffrage.